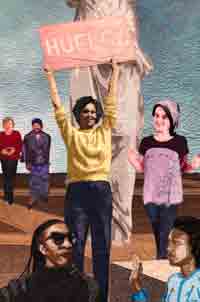 Find Dolores Huerta (1930-    )  Women’s Work standing on the upper level holding a sign that says “HUELGA” (Strike).  She is chosen for her efforts to improve the horrible conditions of farm workers in America, and her work to organize grass roots activism in communities that struggle. Today, in her 90’s, she continues to fight and organize.

Activism in her DNA

Dolores Huerta was born in a small mining town in New Mexico in 1930.  At 3 years old, her parents divorced and she moved to Stockton, California with her mother and two brothers.  Her father, Juan Hernandez, worked as a miner, a farm worker, and was a union activist. Dolores had little contact with her father after she moved to California, but she too, would become a force for worker’s rights.  Dolores credits Alicia, her mother, for teaching her to fight for others.  Involved in community and church organizations, Alicia was known to be kind, and fair to all in her business and community interactions.

As a teenager, Dolores was active in many school clubs and groups, and she was a girl scout through high school. After graduation, she earned a provisional teaching license from the local community college and began teaching elementary school in Stockton.  In the classroom, her heart broke for the poor children of farm workers who came to school barefoot and with empty stomachs.  At the time, field hands worked from sun up to sundown without a break, access to cool water, or toilets.  For this, most earned a wage of only 70 cents hour.

Inspired to address the economic injustices of the agricultural industry, Dolores became an activist organizer.  She joined the local Community Service Organization (CSO) and started the Agricultural Workers Association.  She helped to organize voter registration drives, and campaigned for local legislation to improve the lives of local farm workers.  It was in the CSO in 1955 that Dolores met César Chávez, and discovered a shared interest in improving conditions of farm workers.  Together, they quit the CSO, and founded the United Farm Workers’ Union (UFW) in 1962.  By the end of 1963, Dolores’ had successfully lobbied the State of California to obtain disability insurance and aid for families of farm work.  This was a first law of its kind in the US.

From the beginning, Dolores knew that the farm workers did not have the money to fight for 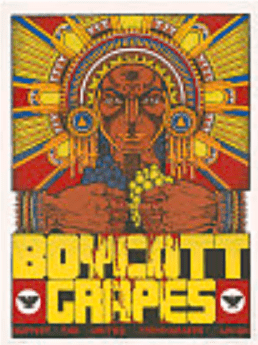 laws to protect them.  She realized that they had power through action, so she organized boycotts, voter registration, and grass roots campaign events.  Inspired by Gandhi’s Salt Boycott in the 1930, and the Montgomery Bus Boycott in the 1950’s, the UFW organized the Delano Grape Strike.  It lasted from 1965-1970.  During this time, Latino and Filipino farm workers joined forces.  They refused to harvest grapes in protest of unbearable working conditions. Strikers walked 300 miles to protest at the state capital.  Other unions, churches, and civil rights groups gave them their support. Eventually, more than 17 million people boycotted grapes and wine from California.

Non-Violent in the Face of Violence

The UFW organized the strike with a strong emphasis on non-violence, knowing that support would disappear if the workers were seen as aggressors.  Grape growers had money and political power on their side.  They had local police and goons hired by the Teamsters Union attack workers on the picket lines.  The police attacked Dolores and they broke three of her ribs and ruptured her spleen.  She spent months recovering.

The strike was long and difficult for workers.  Frustrated, many advocated for violence to achieve their goals, but César and Dolores were determined that the movement remain non-violent. In the end, the table grape growers signed a contract that guaranteed better pay, benefits, and protections for farm workers.  Dolores continued the work and helped pass the Agricultural Labor Relations Act of 1975. This law allowed farm workers to unionize and bargain for better wages and working conditions; another first in the US.

The UFW organized similar strikes in other farming areas.  In 1972, the Arizona legislature passed a law to prevent farm workers from organizing and 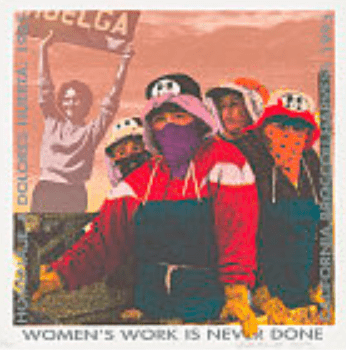 striking, as they had done in California.  Dolores and César went to Arizona to help fight this statute.  Over and over, their challenge to locals to unite and fight was answered with “no se puede,” –No, it can’t be done.  Finally, Dolores responded, “Si, si se puede!” (“Yes, yes, it can be done”), and this became the rallying cry for workers in Arizona.  Later, Barack Obama used this phrase in his campaign for president.  At first, he gave credit for the slogan to César Chávez, but later he apologized, and corrected this mistake in the ceremony where he presented Dolores with the Presidential Medal of Honor.

Dolores was constant, and outspoken in her fight for worker’s rights.  She stood toe-to-toe with men, refusing to back down.  Even though it was not her goal, she became an inspiration to  women across the nation who were also fighting discrimination.  During the grape boycott, Dolores met Gloria Steinem, and she found another kindred spirit.  Moving forward, Dolores broadened her focus to address equal rights for women, along with worker’s rights.

Dolores actively campaigned for people she believed would help her causes. A supporter of Robert Kennedy,  when he was shot and killed in Los Angeles, she was only steps away.   She fought against the use of pesticides that were poisoning farm workers.  Most recently, she fought the Trump administration roll back of pesticide restrictions.

At age 90, Delores continues the work she started in her 20’s.  Today her work is carried out through the Dolores Huerta Foundation, and non-profit with a mission to inspire and organize communities to build volunteer organizations empowered to pursue social justice.

Dolores seeks to plant seeds of activism in poor and working class communities by personally meeting with families in their homes to talk about the importance of voting and civic involvement.  She believes that this approach, while labor intensive, will change the path of families for generations to come.

A 2017 film titled Dolores: Rebel, Activist, Feminist, Mother, tells the story of her life and work.

Discuss coming out from the shadows of men

See Ida B Wells on Women’s Work in person. This quilt will debut as a featured work in the exhibit Women’s Voices, Women’s Votes, Women’s Rights, at the Clinton Presidential Library, in September 2021.  Look for more details on the Events page of this website. Follow this blog for more stories of amazing women. Follow this link to see more of Lea’s Portrait Quilts.