Material Girl: Surrounded with luxury, buried in debt, and still looing for the next shiny thing.  My latest piece is finally finished.  My final step was to add the crumpled papers along the bottom.  They are notices of overdraft, delayed payments, repossession, and foreclosure.  After searching the web for days, I was able to reproduce the series of documents on fabric and then use stiffener to give the appearance of paper. 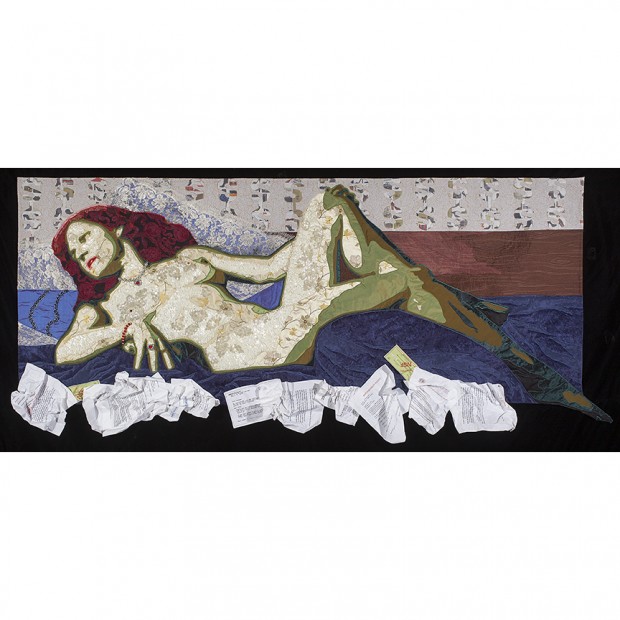 This is, what I consider, my first deliberate foray into contemporary fine art.  It all started last spring when 2 of my husband’s paintings were included in Au Natural, the Nude in the 21st Century. This was an exhibit in Astoria, OR.  We went for the opening reception and had a fabulous time—love that town, and love those people.  I went as arm candy, but was inspired and challenged to come back next year in my own right.

It was from this that Material Girl was born.  The title actually came before the visual concept.  Knowing that I would be working with fabric, it was a no-brainer.  I also knew that I wanted to depart from the historical photos from which I had been working.  I wanted to create a piece that was contemporary in theme, as well as design.

Thirteen years ago, when I returned to the US from living overseas for a decade, I was struck by the massive amounts of stuff that we, as Americans, buy, own, and throw away every day.  I’ve learned to live with it, but it still disturbs me how, as a culture, we get so caught up in the latest fashion, or gadget.

I’ve submitted Material Girl for the next Au Naturel exhibit and now I’m waiting for a response.