Shirley Chisholm(1924-2005) on WOMEN’S WORK, is located at the bottom of the stairs,  wearing a lime green dress.  She is situated between legislators and demonstrators marching forward down the stairs.  Shirley, known as a courageous, and tireless champion for the poor and working class, is famous as the first black woman to serve in Congress.  She was also the first black female presidential candidate from a majority political party.

Born Shirley Anita St Hill on November  30, 1924 to  Caribbean Immigrants from British Guyana and Barbados, her father was a factory laborer, and her mother was a domestic worker and seamstress.  The family lived in the Bedford–Stuyvesant neighborhood of Brooklyn. Believing it would provide a safer environment, Shirley’s parents sent her and three younger sisters to live with their grandmother on the island of Barbados. The girls lived there for about 7 years.  Shirley attributes much of her success to the early education she received in the traditional British school system of Barbados.  Upon her return to New York City at the age of 10, she performed well in the integrated, but mostly white classrooms.

After high school, Shirley earned a Bachelor of Arts at Brooklyn College where she also won awards for debate.  Then, she worked in an early child care center, married Conrad Chisholm, and earned her Masters in Elementary Education from Columbia University. She worked her way up to director of the Hamilton-Madison Child Care Center in the 1950’s, and became an educational consultant to New York City’s Bureau of Child Welfare from 1959 to 1964.

Shirley learned to fight for social justice in her teens from her father who was an active member of a labor trade union.  Her confidence, speaking skills, and grit made her an effective advocate for civil rights, women’s rights, and workers rights.  She was elected to the New York State Assembly in 1965, and became the first black woman elected to the US House of Representatives in 1968.  She served her constituents as a fierce, and vocal legislator.

Shirley’s campaign slogan, “Unbossed and Unbought,” was an apt description.  At first, Shirley

was appointed to the Agriculture Committee.  This was the result of efforts by Southern

congressmen to put her in a place where she would have little influence or power.  Angered, she waged a campaign to be reassigned.  This was unheard-of since freshmen representatives were expected to follow the rules without complaint.  In the end, Shirley got her way, but not before she found a silver lining in agriculture.  In the late 1960’s farmers in the midwest had surplus food that they couldn’t sell.  Shirley teamed with Senator Bob Dole from Kansas and, together, they started what would become the Food Program for Women, Infants, and Children (WIC) to provide food supplements to at-risk women and their infants. 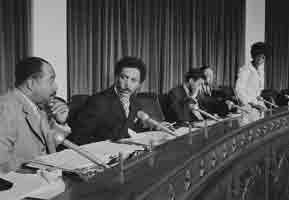 During her seven terms in Congress, Shirley successfully helped pass numerous pieces of legislation that gave voice and power to those who were ignored by the government.  She opposed the VietNam War and fought to reduce military spending in favor of increasing funds for domestic social programs. She pushed through legislation that expanded funding for day care and education, and expanded minimum wage protections for domestic workers. In support of women, Shirley hired only females to work in her congressional office, and half of her staff were black.

Finally, in 1972, Shirley decided to run for President as the Democratic candidate. She became 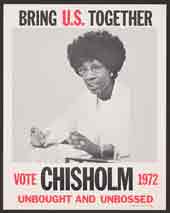 the first black candidate from a major party, and the first woman Democratic party candidate.  A major obstacle for her campaign, were the black male colleagues within the party.  Shirley claimed that she faced more discrimination for being a woman, than for being black. Winning the nomination was a long shot, but, Shirley hoped to amass enough support to be able to influence the party platform. She planned to demand a black vice-presidential candidate, and insist on diversity in cabinet, and agency appointments.

Shirley invited all to “Join me on the Chisholm Trail” as she campaigned across the country on a shoe-string budget, and heavy reliance on volunteers. Her policy positions included support for:

Shirley built a broad coalition of supporters, but, she did not win the nomination. She did, however, come in 4th in a field of 15 candidates at the Democratic Convention.  She inspired women worldwide, and was voted as one of the 10 most admired women in the world.  After the election, Shirley returned to Congress where she served another 10 years.  In retirement, she remained involved in many political organizations, spoke at colleges to encourage student activism, and continued to fight for women’s rights.

What about those demands at the convention…

In her run for president, Shirley hoped to gain the clout to demand a black vice presidential running mate, and diversity in cabinet and agency appointments.  That was in 1972.  Not until the election of Joe Biden and Kamala Harris in 2020, nearly 50 years later, did those demands became a reality.  At the inauguration ceremony, Harris wore purple as a tribute to Shirley Chisholm whose campaign colors were purple and yellow.

The pace of equality is much too slow.  In researching Shirley Chisholm, I must confront the question, “What are you doing about it?”.

As a high school teacher, I work with many students from marginalized groups: young women and children of immigrants.  They often do not have a family history of education or activism, so, I try to plant those seeds.  I challenge students to be the first in their families to graduate from high school, to set a goal of attending college, and to register to vote. These steps can change the path of an entire family for years to come. 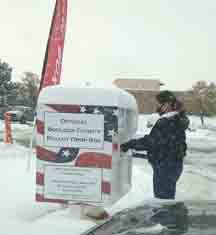 In the 2020 election, a former student contacted me because she wanted to vote.  She didn’t know how, and no one she knew had ever voted in a US election.  Over the phone, I talked her through the registration process.  When her ballot arrived, I explained each of the issues, and shared a booklet from the state voting commission with more information.  After talking her through marking and sealing her ballot, I drove her to the drop-off site and told her, “Next time, bring two friends and we’ll do this again.”

See Ida B Wells on Women’s Work in person. This quilt will debut as a featured work in the exhibit Women’s Voices, Women’s Votes, Women’s Rights, at the Clinton Presidential Library, in September 2021.  Look for more details on the Events page of this website. Follow this blog for more stories of amazing women. Follow this link to see more of Lea’s Portrait Quilts.