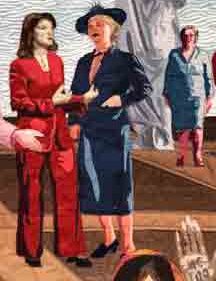 The image of Margaret Sanger on Women’s Work is located on the main level to the right of center.  She is depicted talking with Melinda Gates. They are  discussing the state of women’s reproductive rights. Margaret shares her first person account of the struggle in America, while Melinda updates her on taking that campaign to the world.

The Trauma of Motherhood

Margaret Higgins Sanger was born, September 14, 1879 in Corning, NY.  Her mother, before dying at age 40, became pregnant 18 times.  She gave birth to 11 children (Margaret was #6), and had 7 miscarriages.  Although the cause of her mother’s death was tuberculosis, Margaret believed that the hardship of multiple pregnancies was a big factor in her mother’s poor health, and early death.

Margaret attended Claverack College, and completed nurses training at White Plains Hospital in New York.  From there, she worked as an obstetrical nurse on the lower east side of New York City.  While working with poor women, she saw the devastating impact of unwanted pregnancies and botched abortions.  She began a campaign to legalize contraception.  It was Margaret who coined the phrase “birth control”.

Talking About Birth Control is Illegal

Six years prior to Margaret’s birth, the Comstock Act of 1873 was passed making it illegal to publish and disseminate literature deemed obscene.  Along with pornography, materials related to sex education, contraception, abortion were also considered illicit.   Mailing such materials, or transporting them across state lines, was also a federal offense.  Many states passed similar, and more restrictive laws.  For example, in Massachusetts, any person simply discussing information about birth control was subject to fines and imprisonment.  In Connecticut, the use of contraception, even by consenting married couples, could result in imprisonment for up to a year.

In 1914, Margaret began publishing The Woman Rebel, a magazine meant to inform women, and inspire them to rebel against unjust laws.  The publication covered a wide range of topics, including the right to vote, workplace issues, marriage and child rearing, along with reproductive rights and birth control.  She managed to publish 8 issues before she was brought up on charges. Facing the possibility of 20 years in jail, Margaret escaped to England.  There, she continued to write pamphlets about sex education and had them shipped back to America where her supporters distributed them. A year later, Margaret returned to the US  to face trial.   Because of a massive amount of sympathetic publicity generated by her outraged supporters officials decided to drop all charges.

Clinic Shut Down by Police

Margaret sees patient at the Women’s Clinic in Brooklyn, 1916.

Following the trial, supporters urged Margaret to resume publication of the magazine, but she had bigger plans.  In 1916, she opened the nation’s first women’s clinic offering birth control in Brooklyn, NY.  Quickly, Police charged her with being a public nuisance and she was sentenced to 30 days in the Queens penitentiary.  The clinic was closed within a week. However, in that short time, over 400 women were served.  One positive result, a court ruled that birth control could be prescribed by doctors for medical reasons.

Undaunted, Margaret went on to found a research institute, scientific journal, an advocacy organization to promote the development of birth control, and recognition of women’s reproductive rights. In 1942, these became the parent organizations of the Planned Parenthood Federation of America. Next, Margaret took her campaign abroad to found the International 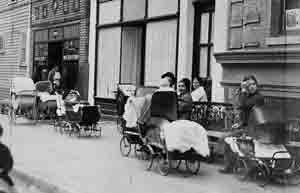 Outside the women’s clinic,

Planned parenthood Federation in 1953.  Margaret’s tireless efforts eventually led to the development and FDA approval of the birth control pill in 1960.  This gave women unprecedented control of their own bodies, but, full repeal of the Comstock Act by the Supreme Court of the US did not occur until 1965.

Eugenics was a social philosophy that became popular during the 20th century.  Developed by British scientist Francis Galton, it was an extension of Charles Darwin’s theory of natural selection.  It proposed improving the human race by keeping people with negative traits from reproducing. At that time, groups, such as the Nazis, used this philosophy to justify the mistreatment of certain religious and minority groups, and the disabled.

Over the course of her campaign, Margaret Sanger made comments that implied support of eugenics.  Opponents of Planned Parenthood asserted that her efforts to promote birth control  focused on poor and minority populations, and were, at their core, racist.

But, ardent supporters of Margaret Sanger point out that use of eugenics phrases was common in the mid 1900’s.   They accuse Planned Parenthood opponents of taking selected quotes out of context to undermine the organization.

My Personal Take Away…

Read several of Margaret’s writing.  Clearly she focused on the betterment of women’s lives, not the manipulation of the racial and religious makeup of society. I think that, in hindsight, she could have chosen her words more carefully, spoken with greater eloquence.

Her position is best summarized in this quote from the June 25, 1914 edition of The Rebel Woman:

“Our fight is for the personal liberty of the women who work. A woman’s body belongs to herself alone. It is her body. It does not belong to the Church. It does not belong to the United States of America or to any other Government on the face of the earth. The first step toward getting life, liberty and the pursuit of happiness for any woman is her decision whether or not she shall become a mother. Enforced motherhood is the most complete denial of a woman’s right to life and liberty.”

Many times, I have expressed my ideas and bungled my words. Too often, my enthusiasm for a subject may have interfered with the internal filters that would have edited my comments before I spoke them aloud.  So, I shudder to think how selective quotes from my past could present a false view of who I really am. Margaret Sanger on Women’s Work also serves as a reminder to me to take a broader view of others before passing judgment.

Women’s Work will debut as a featured work in the exhibit Women’s Voices, Women’s Votes, Women’s Rights, at the Clinton Presidential Library, in September 2021.  Look for more details on the Events page of this website.