You can find Alice Paul (1885-1977)  on Women’s Work, standing tall as one of the three central figures on  the quilt.  They are the Visionaries, at the top of the stairs.  She holds out a glass to toast passage of the 19th Amendment. Immediately following, she began to write the Equal Rights Amendment. 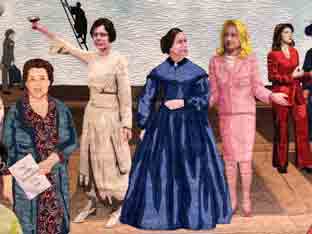 Suffragette from an Early Age

Alice was born on January 11, 1885 in Mount Laurel, New Jersey into an affluent Quaker family.  As Quakers, her parents believed in working to improve society on many fronts.  Alice was enlisted to the fight for women’s rights from an early age. Her mother was a suffragist, and frequently brought Alice with her to meetings and events.

With a strong family commitment to the education of women, Alice had excellent schooling opportunities.  She attended Swathmore College where she earned a degree in Biology in 1905.  She then earned a Master’s degree in Sociology from New York School of Philanthropy College (now Columbia University) in 1907.  Next, Alice took 3 years to travel in England and study their system of social work before returning to the US to earn a Ph.D from the University of Pennsylvania in 1910.

While in England, Alice met Lucy Burns, another American. The two friends joined the women’s suffrage movement in England, a movement that was much more radical and aggressive than in the US.  Eventually, Alice and Lucy brought the militant tactics they learned in England back home to the states.  Alice learned about protests and hunger strikes, and how to use the media to generate publicity and support.

Bringing the Fight to Washington 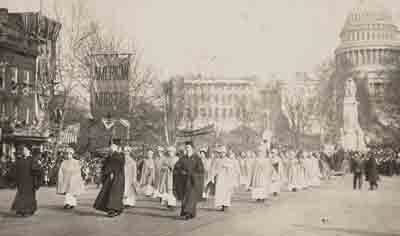 In 1913, Alice helped organize a march on Washington, held March 3, the day before President Woodrow Wilson’s inauguration.  Nearly 8000 women marched down Pennsylvania Ave. with banners and floats demanding the right to vote.  After inaugruation, President Wilson refused to meet with Alice and members of the NWP.  Instead, he insisted that it was not yet time for a constitutional amendment.  The fight continued.

In  January 1917, Alice helped organize the Silent Sentinels,” a group of over 1000 women who 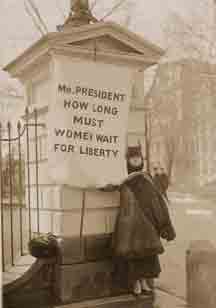 picketed in front of the White House for 18 months.  Each day, women would stand at the gates with sign that read “Mr. President, how long must women wait for liberty?” and “Kaiser Wilson”. The women endured harsh weather conditions, as well as, verbal and physical attacks from onlookers.  Rather than protect their right to free speech, police, beat and arrested the protesters on trumped up charges of obstructing traffic.

In the face of police brutality, Alice remained fierce.  When she was sentenced to 7 months in jail, Alice organized a hunger strike.  Doctors were brought in to force feed her.  This involved strapping her to a chair, holding her head back, shoving a tube down her throat. Doctors also threatened to declare her insane and send her to an asylum. 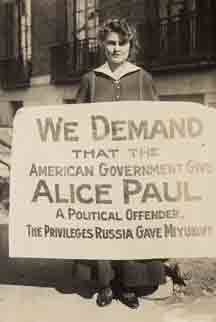 Newspaper accounts of the treatment the women were enduring in prison prompted public sympathy and support for the cause.  Finally, in 1918, President Wilson publicly announced his support for the suffrage movement.

Passing the 19th amendment remained a slow process.  Once taken up by the Congress,  the Senate and the House of Representatives must approve the amendment, and then at least 36 states must ratify it.  This took almost 2 years. but the 19th amendment was finally adopted as part of the US Constitution on August 26, 1920. Alice Paul on Women’s Work holds up a glass to toast the passage of the amendment. It was actually a glass of grape juice, as Alice was against drinking alcohol. 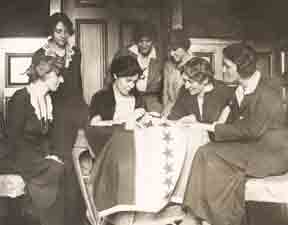 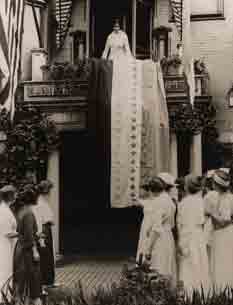 What about the Equal Rights Amendment…

Following the passage of the 19th Amendment, Alice immediately turned her attention to the Equal Rights Amendment. After all, with its latest amendment, the Constitution guaranteed  women the right to vote; nothing more.  The ERA guaranteed equal legal rights for all American citizens regardless of sex. It would end distinctions between men and women in cases of divorce, property ownership, working conditions, pay, and a host of other issues.  Alice Paul and Crystal Eastman introduced the ERA to Congress in December 1923. The bill languished for many years until it gained massive support in the 1960’s.  The ERA was passed by Congress and the Senate in 1972.  By 1977 only 35, of the required 38 states had ratified the amendment.  Alice Paul died in 1977, knowing the amendment, while close at hand, was not yet a reality.

My Personal Take Away

Alice Paul stands on Women’s Work as she stood her entire life, committed to equality for women, in fact, all American citizens. I’m struck by her unwavering dedication to the cause, and what she was able to accomplish as a result.  I’m in a period in my own life where I feel constantly distracted from the task at hand by frivolous videos, news reports, ads for things I don’t really need. In my studio,  I’m hanging a photo of Alice Paul holding up a glass as a reminder to focus on what is important, and to turn off the rest of the noise.

Women’s Work will debut as a featured work in the exhibit Women’s Voices, Women’s Votes, Women’s Rights, at the Clinton Presidential Library, in September 2021.  Look for more details on the Events page of this website.