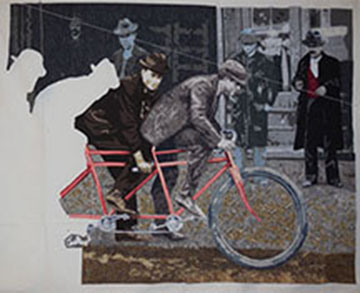 One line through many elements

With a week off work, my travels over, and all guests have gone home, I’ve been able to make great progress on the Bike Boys.  While traveling, I did pickup some new brown fabrics with deeper, darker shades.  I used them to replace some earlier choices, hoping to strengthen the color schemes for some of the bikers.  I think it worked.  My second bike boy really pops forward.  I also built the foreground with rich tones for the sidewalk and street (you were right, dad), and added the cooler grays for the background.

Originally, I had chosen to delete the figure standing in the large dark space, but when I saw it on the wall, I knew he needed to rejoin the party.  When I added him, I made his features vague and used a very narrow range of value.  This served to push him farther into the shadows and create a third plane within the composition: bikers in the foreground, onlookers on the sidewalk, and this guy in the background. I also raised him up just a bit so that he sits on a tangent in line with other figures in the piece. He will  become the top of a triangular shape within the piece. I pinned the string across the design wall to show this.

Next, I realized that the top of the piece has reached the approximate 2/3 mark.  This got me thinking about the golden mean and how it can be used to create a pleasing composition.  The golden mean refers to a ratio of  3/8 or 5/8, but many people use thirds, because its easier.  If you don’t know about it, it’s worth a google search.  I placed pins at the corners and at the 1/3 marks along the edges and then wrapped string around the pins to create lines joining each of the points.  Placing objects along these lines helps to create a pleasing composition and can be used to guide the eye around and through the piece.  Also, the places where these lines cross could be considered power points.  It was exciting for me to see how often these lines were working with my composition. 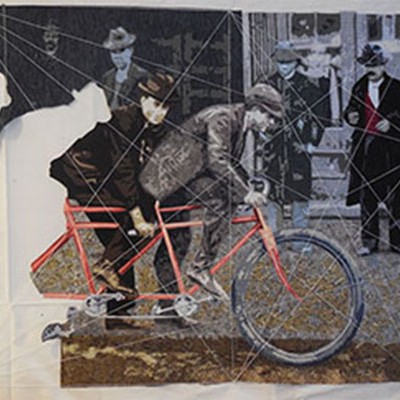 Here are some things to note:

I’ve got to take the lines down now so that I can fuse more fabric, but I’ll put them up again when it all comes together.