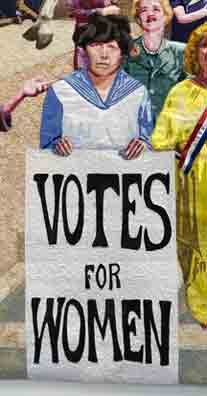 Lucy Burns, a key figure in the Suffragette Movement, appears on the Women’s Work Quilt at the very front, holding a large protest sign that reads, “VOTES FOR WOMEN”.  She was a dynamic force in the National Women’s Party.  Her courage and sacrifice helped lead to the passage of the 19th amendment.

Lucy was born in Brooklyn, New York into an Irish Catholic family in 1879. She had a quick mind, an engaging spirit, and a gift for language.  After attending Packer Collegiate Institute where she received instruction in social graces and religion, Lucy went on to study at Columbia University, Vassar College, and Yale University.  She earned a teaching degree and taught English at Erasmus High School in Brooklyn for two years, but had a strong desire to continue her own studies. She was lucky to have a father who encouraged, and financed her education.  Lucy headed abroad to study at the University of Berlin in Germany, and Oxford University in England.  She used her linguistic skills to charm audiences with her spoken, and written words.

Trading Education for Experience in the Suffragette Movement

In England, Lucy learned about the suffragette movement.  She abandoned her studies and took up the cause.  Lucy practiced her skills and became an eloquent “Street Speaker” who was arrested four times for being a public nuisance.  While in jail, she met and became good friends with another American, Alice Paul.

Together, they brought the militant tactics they had learned in England to the suffragette movement in the US. However, as members of the National Women’s Suffrage Association, they were impatient with progress and split to form a new group that eventually became the National Women’s Party (NWP).

The Suffragette Movement: Silent Sentinels at the White House 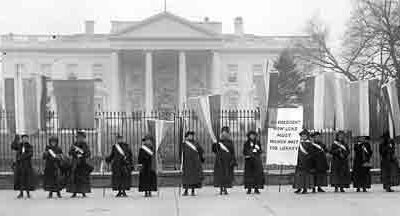 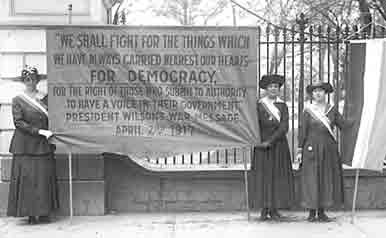 Lucy organized protests and edited The Suffragist, a weekly NWP journal.  A key player in organizing the “Silent Sentinels”, Lucy oversaw more than 1000 women who picketed in front of the White House during the Wilson administration.  When important dignitaries visited the President, Lucy made sure that extra large banners with messages such as, “America is not a free democracy as long as women were denied the right to vote.” we’re prominently on display.

Woodrow Wilson found the protests irritating.  In a letter to his daughter he wrote  that these women “seem bent on making their cause as obnoxious as possible.” He also encouraged the police to crack down on the demonstrators.  Police brutality increased, and they began arresting the women for charges such as “obstructing passage on the sidewalk.” 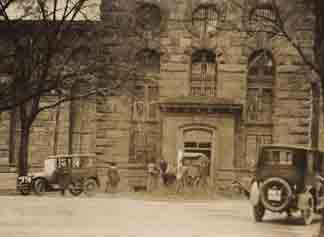 Suffragettes taken to prison for protesting at White House.

Officers took the women to the Occoquan Workhouse, outside of Washington, DC.  Conditions were dire.  There were maggots in the food, the water was dirty, and the bedding was filthy.   Arrested six times, Lucy never backed down.  She led a hunger strike within the jail.  For this, the warden put her in solitary confinement. She persisted, and he initiated forced feedings. This was a brutal practice that involved strapping the victim to a chair and shoving a tube down her throat.  As time passed, the sentences increased in length, and the brutality worsened.

Suffragette Movement and The Night of Terror

The most brutal events occurred on November 14, 1917.  Thirty-three women, who had been 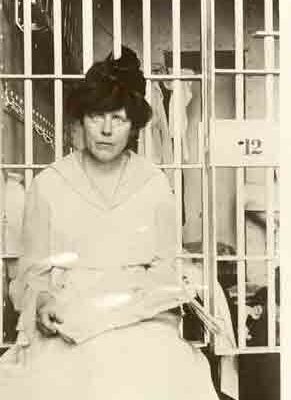 peacefully protesting, were arrested and brought to Occoquan.  They demanded to be treated as political prisoners.  Exasperated, the Prison Superintendent instructed his guards to teach the women a lesson.  They drug the women down a hall and threw them into dark, dirty cells. Through the night, the women were beaten and tortured.  Guards threw them against iron beds and benches until some lost consciousness.  They cuffed Lucy’s hands to the top of her cell door so that she was forced to stand through the night.  One woman, witnessing the violence, had a heart attack, but was denied medical treatment until the following morning.  By that time, she had died.

Lucy kept a diary of her experiences in the jail, and others shared their stories.  Published accounts of what became known as “The Night of Terror” 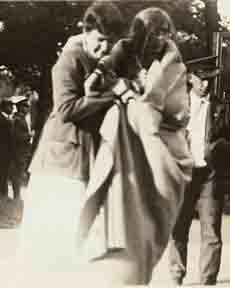 prompted public outrage.  The Prison Superintendent, under pressure released the women. Eventually, the women received pardons on all charges  With public sentiment now on their side, this night became a turning point in the campaign for the 19th amendment.

After passage of the 19th amendment, Lucy withdrew from prominence in the suffrage movement, and she performed charity work for the Catholic Church until her death in 1966.

My Personal Take Away…

The courage and determination these women determined to gainthe right to vote astounds me.  Even more, the brutality of the opposition startles me.  In the present day, I know that my right to vote is now secure, but I’m also aware that the voting rights of other US citizens is at risk.  Just as others fought for me, I feel compelled to fight for equal treatment of all citizens.  However, we live in strange times where truth and fairness are under assault.  I’m left wondering:  What am I willing to endure? and,  When the time comes, will I make the necessary sacrifices in the name of justice?

What about the Workhouse?

The Workhouse Arts Center is located at:  9518 Workhouse Way, Lorton, VA 22079.  If you can’t visit the museum in person, visit the website.  Hear the words of the suffragettes read aloud by museum staff from the original diaries and writings:

Lucy Burns appears on Women’s Work holding a picket sign as she might have done in front of the White House.  The Women’s Work Quilt will debut as a featured work in the exhibit Women’s Voices, Women’s Votes, Women’s Rights, at the Clinton Presidential Library, in September 2021.  Look for more details on the Events page of this website.

Pruitt, Sarah, (4/17/19). The Night of Terror: When Suffragists Were Imprisoned and Tortured in 1917.  https://www.history.com/news/night-terror-brutality-suffragists-19th-amendment